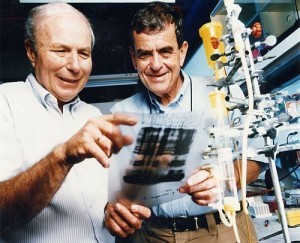 Professors Avram Hershko and Aaron Ciechanover, Technion’s 2004 Nobel Laureates in Chemistry along with their colleague Professor Irwin A. Rose from the University of California in Irvine, were elected as fellows of the first class of the Academy of the American Association for Cancer Research(AACR).  This first class will be inaugurated during the upcoming annual conference of the AACR. The AACR Academy was established to recognize and honor scientists who have made substantial contributions that have propelled significant innovation and progress in the research and development of therapies against cancer. Fellows are selected through a rigorous process involving peer review, which evaluates them based on their scientific achievements in cancer research.  The Technion’s esteemed researchers and their colleague Rose were elected to the academy for “their breakthrough discoveries in the understanding of mechanisms of malignancies, which paved the way for development of novel effective drugs to treat them.”

“Our Board of Directors decided to found the AACR Academy as a means by which to recognize scientists whose contributions to the cancer field have had an extraordinary impact,” says Margaret Foti, Ph.D., M.D., chief executive officer of the AACR. “Membership in the Fellows of the AACR Academy will be the most prestigious honor bestowed by the American Association for Cancer Research.”

The inaugural class of AACR Academy fellows will consist of 106 individuals, a number that symbolizes the “age” of the organization upon the establishment of the Academy.

The list of fellows of AACR represents the most distinguished group of scientists from around the world in biology and medicine in the second half  of the 20th century and  the beginning of the 21st century. One of the most prominent scientists in this group is James Watson, who was among the discoverers of the double helix structure of DNA. The list includes many Nobel Laureates, among them Professor Paul Berg (Nobel Laureate in Chemistry 1980, for his fundamental studies of the biochemistry of nucleic acids, with particular regard to recombinant-DNA), Sydney Brenner who was awarded the 2002 Nobel Prize in Medicine or Physiology (with two other colleagues, H. Robert Horvitz and John E. Sulston for their discoveries concerning programmed cell death – apoptosis), Robert Lefkowitz (the 2012 Nobel Laureate in Chemistry, for his joint studies with his colleague Brian K. Kobilka of G-protein-coupled receptors), and Shinya Yamanaka (the 2012 Nobel Laureate in Medicine or Physiology; the prize was awarded jointly with his colleague Sir John B. Gurdon for the discovery that mature cells can be reprogrammed to become pluripotent).