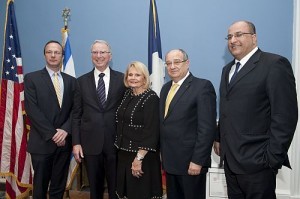 NEW YORK – Dr. Irwin Mark Jacobs, Founding Chairman and CEO Emeritus of Qualcomm, and his wife Joan Klein Jacobs, today announced a $133-million gift to Cornell University and the Technion-Israel Institute of Technology to create the Joan and Irwin Jacobs Technion-Cornell Innovation Institute (JTCII). The JTCII is a key component of Cornell Tech, whose permanent campus will be located on Roosevelt Island. The funds will help support curriculum initiatives, faculty and graduate students, and industry interactions in a two-year graduate program. The gift was announced at City Hall with Mayor Michael R. Bloomberg, Cornell President David J. Skorton and Technion President Peretz Lavie.

The Jacobses are both Cornell alumni who have a long history of supporting both Cornell and the Technion-Israel Institute of Technology. They have established the Irwin M. and Joan K. Jacobs Scholars and Fellows Programs and the Irwin and Joan Jacobs Professorship, both in the College of Engineering, as well as the Joan Klein Jacobs Cornell Tradition Fellowship in the College of Human Ecology at Cornell. Dr. Jacobs is a former member of the Cornell University Council and Mrs. Jacobs served on the President’s Council of Cornell Women.  In recognition of their distinguished service to Cornell, Dr. and Mrs. Jacobs were both elected Presidential Councillors in 2005. The Jacobses’ visionary support of the Technion includes the Irwin and Joan Jacobs Graduate School and the Irwin and Joan Jacobs Center for Communications and Information Technologies. A member of the Technion International Board of Governors, Dr. Jacobs is a Life Trustee of the American Technion Society (ATS) National Board of Regents, and a member of the ATS San Diego Chapter. Dr. Jacobs, along with Mayor Michael R. Bloomberg and Google Executive Chairman Eric Schmidt, serves as an advisor to Cornell Tech.

Dr. and Mrs. Jacobs are among the world’s most generous philanthropists. Their support has had a significant impact on numerous cultural, medical, educational, and civic organizations. The engineering school at the University of California, San Diego bears Dr. and Mrs. Jacobs’ names, as do the performing arts center of the campus La Jolla Playhouse and the new UCSD Medical Center.

“We are delighted to partner with Cornell and the Technion on this unique educational initiative,” said Joan and Irwin Jacobs. “We believe strongly in the mission of this international collaboration to drive innovation and to foster economic development. We are proud of our long association with both of these distinguished institutions and share their dedication to inspire and train a next generation of entrepreneurs, forming new companies and strengthening existing ones including, of course, Qualcomm.”

“Cornell Tech will bring a sharp increase in science and engineering teaching, attract students from around the world, and spin off new local companies and thousands of new jobs, and inject billions of dollars into our economy,” said Mayor Michael R. Bloomberg. “Irwin and Joan Jacobs have helped pave the way for innovations that improve our world, and the endowment they’re creating at Cornell Tech will do the same. We’re grateful for their investment in the future of New York City.”

“This transformative gift will support the distinctive international partnership between Cornell and the Technion that is already creating a new model of graduate tech education in New York City,” said Cornell President David J. Skorton. “We are overwhelmed by the continuing generosity of Joan and Irwin Jacobs, whose commitment to Cornell and to innovation in engineering and related disciplines is deeply appreciated.”

“Joan and Irwin’s magnificent gift will play a major and decisive role in fulfilling Mayor Bloomberg’s vision of creating a leading global center of innovation in the heart of New York, enabling the city to become the technology capital of the world,” said Technion President Peretz Lavie. “The Joan and Irwin Jacobs Technion-Cornell Innovation Institute will also serve as a bridge between Israel and the USA and Haifa and New York. We are also very grateful to the American Technion Society for their continued support and help in securing this gift.”

Craig Gotsman, the Founding Director of JTCII and the Technion’s Hewlett-Packard Professor of Computer Engineering, said, “I am proud to lead this endeavor that will help bring a global startup culture to New York and encourage the entrepreneurial efforts of our faculty and students. Together with our partners at Cornell Tech, we look forward to nurturing the next generation of applied technology leaders who will meet the needs of New York’s economy.”

“Today marks another important step forward for an initiative that we believe will transform our City for generations to come,” said New York City Economic Development Corporation President Seth W. Pinsky. “Applied Sciences NYC is a key piece of our larger innovation strategy that includes ongoing efforts to foster research and training at all levels of education. I would like to thank Dr. and Mrs. Jacobs for their generosity, as well as Presidents Skorton and Lavie, for their partnership and collaboration. ”

The JTCII plans to offer a two-year interdisciplinary program where students earn dual master degrees concurrently — one from Cornell and one from the Technion. This degree program will allow students to specialize in applied information-based sciences in one of three hubs focused around leading New York City industries – Connective Media, Healthier Living and The Built Environment–while honing their entrepreneurial skills. The first area of specialization will be in Connective Media and is slated to begin in the fall of 2014. Research will also be focused on the hub areas.

A novel program for Postdoctoral Innovation Fellows will launch in Fall 2013. The aim is to support individuals who seek to commercialize their research ideas in the stimulating environment at the JTCII while taking full advantage of the entrepreneurial network of Cornell Tech and the proximity to New York City-based markets.

Cornell Tech offers a distinctive model of graduate tech education that fuses scientific excellence with real-world applications and entrepreneurship, rooted in the latest academic research. Students, faculty and industry experts learn and work together to develop ideas and create new ventures that have global impact. The campus is attracting the best and brightest in technology, immersing them in an entrepreneurial culture with deep ties to the local business community, aiming to spawn new companies and tech ventures in New York City.

This gift marks another major milestone for the campus. Cornell Tech launched its first degree program in January – a Cornell University Master of Engineering in Computer Science and is rapidly rolling out new academic programs, recruiting star faculty, developing a distinctive new model of tech entrepreneurship, and designing its permanent campus on Roosevelt Island, which will break ground early next year.

The City’s Applied Sciences NYC initiative was designed to capitalize on the considerable growth presently occurring within the science, technology and research fields in New York, and builds on the Bloomberg Administration’s dedication to creating a more diversified and competitive economy for the future. In December 2011, the Cornell and Technion partnership was selected by the City as the first winner of the Applied Sciences competition. When completed, the Roosevelt Island campus will house approximately 2,000 full-time graduate students.