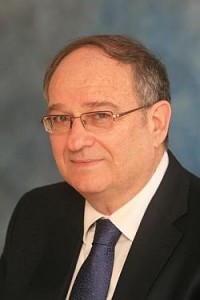 The Technion Senate reelected the President Professor Peretz Lavie, by an overwhelming majority (92 in favor, 2 against and 2 abstentions) for a second four-year presidential term. The decision was approved unanimously a couple of days ago, by the Managing Committee of the institute. The nomination must also be approved by the Board of Governors, which will convene in the month of June of this year.

During his first term as president (2009-2013), Professor Peretz Lavie set at the top of his objectives the issue of recruiting new faculty members, a university’s most important asset, as well as appropriating resources essential for settling them comfortably and smooth integration to the Technion. From the very beginning of his presidential term and until the end of it (in 2013), the Technion recruited 130 new faculty members, and the number of faculty will have grown from 533 members to 564.

The second objective of Professor Lavie was to change the learning environment on campus by revamping the Technion’s image from a “rigid” institute that is inconsiderate to the wellbeing of its student body. “We are now in the midst of a process to transform this image – I will point out a number of actions we took in order to get to this stage,” says Professor Lavie. “Firstly, we continued and expanded the program “A Good Start” whose goal was to ease the “shock” of first year study loads at the Technion, particularly by improving the teaching of mathematics. Secondly, in cooperation with the Student Association, we made significant steps towards improving services to students, such as greater transparency regarding examination marks, the introduction of regulations that enforce a maximum time period for marking exams and publicizing test results, as well as significantly more lenient examinations procedures that are considerate to students in reserve duty or involved in parenting. Additionally, we began to upgrade and renovate teaching facilities in most of the faculties, for the benefit of students. The program “Spirited Campus” encourages students to enrich and vary their leisure time on campus. Recently, an interactive map of the Technion campus was launched onto the university’s website, showing the wide range of events and possibilities for spending leisure time on campus.” Professor Lavie mentioned the “Yanai Awards” – an individual award given to faculty members for outstanding excellence in academic education, and for the establishment of the Graduate Student Village providing high standard accommodations to graduate students with families.

In Professor Lavie’s first term as Technion President, a substantial increase was recorded in the research funds and in revenue from intellectual property, from seven million US dollars in 2008, to 21 million dollars in 2012. To encourage the commercialization of intellectual property, an investment fund was established for Technion companies and a seed fund to finance research under the Nevet Program.

Professor Lavie emphasized the momentous honor the university received jointly with Cornell University, upon being chosen by the city of New York in an international challenge, to establish an institute of scientific research and applied engineering in the heart of Manhattan. According to the President, winning this challenge, which was entered by over 40 leading universities from the United States and around the world, focused the attention of the academic world on the Technion’s achievements.

The recruitment of excellent faculty members will remain at the forefront of Professor Lavie’s objectives in his second presidential term. “The quality of the Technion and its future status will be determined by, first and foremost, the quality of its faculty,” says Professor Lavie. The Technion President added that in the next four years he will continue to develop interdisciplinary research centers in addition to the establishment of centers of excellence awarded to the Technion in a national challenge by Israel’s Council for Higher Education. Additionally, development will continue with respect to the international activities on the Haifa campus. “For this reason we have created a new framework, “Technion International,” which unifies all of the Technion authorities responsible for and connected to international activities on campus,” he said. “In the next four years we will continue to work towards increasing the numbers of foreign post-doctoral and graduate students on campus, while meticulously adhering to ensuring their academic standing, in keeping with how this process has been done to date.”