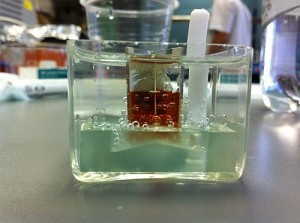 Using the power of the sun and ultrathin films of iron oxide (commonly known as rust), Technion-Israel Institute of Technology researchers have found a novel way to split water molecules to hydrogen and oxygen.  The breakthrough, published this week in Nature Materials, could lead to less expensive, more efficient ways to store solar energy in the form of hydrogen-based fuels.  This could be a major step forward in the development of viable replacements for fossil fuels.

“Our approach is the first of its kind,” says lead researcher Associate Prof. Avner Rothschild, of the Department of Materials Science and Engineering. “We have found a way to trap light in ultrathin films of iron oxide that are 5,000 thinner than an office paper. This enables achieving high solar energy conversion efficiency and low materials and production costs. ”

Iron oxide is a common semiconductor material, inexpensive to produce, stable in water, and – unlike other semiconductors such as silicon – can oxidize water without itself being oxidated, corroded, or decomposed.  But it also presents challenges, the greatest of which was finding a way to overcome its poor electrical transport properties. “For many years researchers have struggled with the tradeoff between light absorption and the separation and collection of the photogenerated charge carriers before they die out by recombination,” says Prof. Rothschild. “Our light-trapping scheme overcomes this tradeoff, enabling efficient absorption in ultrathin films wherein the photogenerated charge carriers are collected efficiently. The light is trapped in quarter-wave or even deeper sub-wavelength films on mirror-like back reflector substrates. Interference between forward- and backward-propagating waves enhances the light absorption close to the surface wherein the photogenerated charge carriers are collected before recombination takes place.”

The breakthrough could make possible the design of inexpensive solar cells that combine ultrathin iron oxide photoelectrodes with conventional photovoltaic cells based on silicon or other materials to produce electricity and hydrogen.  According to Prof. Rothschild, “these cells could store solar energy for on demand use, 24 hours per day.”  This is in strong contrast to conventional photovoltaic cells, which provide power only when the sun is shining (and not at night or when it is cloudy).

The findings could also be used to reduce the amount of rare elements that the solar panel industry uses to create the semiconductor material in their second-generation photovoltaic cells.  The Technion team’s light trapping method could save 90% or more of rare elements like Tellurium and Indium, with no compromise in performance.