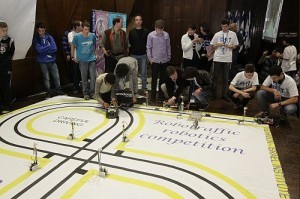 Underlying the competition, hosted by Dr. Evgeny Korchnoi, is an initiative to reduce the involvement of young drivers in car accidents. The competitors were small vehicle-shaped mobile robots that are operated in situations that simulate road traffic. Robotraffic is a unique robotics competition aimed at acquiring safe driving knowledge and skills. The competition makes use of specifically developed “safe roads” employing sensors that communicate with the vehicles (robots) on the roads. The sensors return the automatic response of the vehicle to signals, traffic lights, obstacles, road signs, etc.

The competition requires the competitors – school students from across the country and this year also from abroad – to build a robotic vehicle that will observe road signs and traffic lights, obey traffic laws and avoid accidents. First place in the competition for elementary schools was won by 5th grade students from the Begin school in Kiryat Motzkin: Adi Ostrov, Eliad Liani, and Gal Gadot. “In the robotics studies, that are held in the afternoon hours by Ytek Company, we work with computers, watch robotics presentations, and program,” says Adi, and Gal adds: “we experimented before coming here, and we might also have been lucky.”

Prof. Moshe Shoham, Head of the Robotics Center, explains that the competition has several goals, among them the study of robotics, road safety and bringing about the development of smart roads and autonomous driving systems. “The requirements are adapted to the various age groups, and the competitors are supposed to deal with issues in programming and control, car assembly and sensor installation, and all this requires close knit teamwork.”

It was the first time in the competition for the delegation that came from Shalom Aleichem school in Vilna, and the trip to Israel was financed by the students’ parents as well as by the World Ort Organization. Mark Kotz, a member of the school board, who accompanies the delegation, says that the contact with the Technion was established in an assembly of World Ort’s Board of Representatives in Berlin, where he met Haim Dribin, a robotics teacher at Misgav school. Dribin told him about the competition, and Shalom Aleichem school recruited Prof. Sergey Borodin, who is currently in charge of the robotics studies there.

Sami, a mechatronics teacher in Shaab high school, near Carmiel, attended the competition with eight of his students. “There are 17 mechatronics students in the class, only four of them boys. The girls have a very technological and creative mind, and they are highly suitable for these subjects. They also understand that the technology opens for them a window to a brilliant future.”

The main goals of the competition are to impart familiarity with driving laws, good driving habits, a positive approach to safe and careful driving and an understanding of the limitations of the car while diving, and to bring about the development of smart roads with sensors that would reduce the number of car accidents and of sophisticated robotic systems for safe driving. During the competition the robots move automatically, carefully avoiding accidents and observing traffic laws. The competition arena is a model of a road with intersections, traffic lights, road signs and obstacles. The guests of honor were: Prof. Oded Shmueli, Technion Executive Vice President for Research; Prof. Moshe Shoham, Head of the Leumi Robotics Center at the Technion; the Director General of World Ort Organization’s Kadima Mada Program in Israel, Avi Ganon and senior representatives of the Ministry of Education.

Avi Ganon, Director General of World Ort Organization’s Kadima Mada Program in Israel: “We do much to enhance science and technology and to maintain contact with the Jewish communities worldwide. This competition connects varied cultures and communities and provides a venue for the exchange of know-how and the development of joint ventures by the countries.”