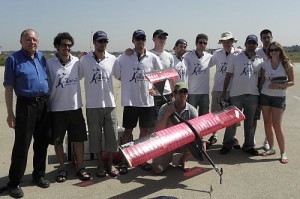 A group of students from the Technion Faculty of Aerospace Engineering has won first prize in the student projects competition in the 52nd Israel Annual Conference on Aerospace Sciences, which opened yesterday in Tel Aviv and is held today at the Technion.

Under guidance of Shlomo Tsach of Israel Aerospace Industries, the students built a UAV for military ground forces. They entered it in the DBF (Design, Build, Fly) competition in the USA, and won first prize in the large aircraft category as well for the best written report (receiving a score of 98.5, with the  comment: “this is the best paper ever written in the competition”). In the general competition (large and small aircraft) they came in eighth place out of the 88 groups that participated from the USA and worldwide.

The competition in the USA is organized by AIAA, the American Institute of Aeronautics and Astronautics, the principal body which oversees the development of aviation technology and infrastructure in the USA.

“The wingspan of the UAV built by the students is 1.90 meters and it weighs about four kilograms”, says Shlomo Tsach. “The project contributes so much to these students, especially later in their professional life. It is run like an IAI project, with a procurement team, logistics, coordination and a work plan that is updated on a weekly basis”.

Shlomo Tsach graduated from the Techion in 1970 and has been working at Israel Aerospace Industries for 42 years. He has trained hundreds of students. “The generations are not diminishing”, he says. “A group that does such 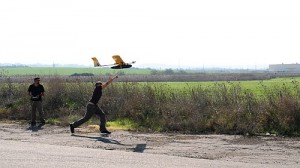 Yossi Yoresh, Gal Klein, Itzhak Shiroky, Yakov Ben Shushan and Itai Strauss, Air Force Major and four soldiers, were awarded in the conference the Neev-Ya Durban Memorial Prize for Best Paper, for the paper “Cable Dynamics under General Excitation Fields”. In their work, the five focused on finding a mathematical solution to the behavior of a destabilized cable under various constraints.

Their project attempted to simulate the dynamics of the behavior of a cable under general excitation fields. For example: an aircraft fueling cable, an Electricity Company cable, the lowering of  an anchor in a flow or even a civil aviation cable that grasps a sign during flight. Their aim was to examine the response of the destabilized cable and to attempt to find solutions for its behavior, and they later intend to experiment in order to attain a solution that would successfully control the cable even while it is subject to a destabilizing influence.

A team representative says: “we have verified the mathematical formulas we proposed vis-à-vis existing models – solutions for a cable under general excitation fields, and our next step is experiments. Ultimately, one of our aims is to identify the speeds in which aircraft can be fueled”.

Each of the soldiers will be awarded NIS 1000. The Neev-Ya Durban Prize is awarded in memory of Air Force officer Neev-Ya  Durban of Blessed Memory, who was murdered nine years ago on a quiet Tel Aviv street by a mugger. His parents, Rachel and Prof. David Durban of the Technion, have set up a fund in his name, to encourage the type of innovation and entrepreneurship papers that had characterized their son. The “TechnoBrain” competition, conceived by Neev-Ya while he was student at the Technion, takes place there every year.

Prof. Ben Zinn of the Georgia Institute of Technology was chosen to receive the Prof. Meir Hanin Memorial International Prize, awarded to leading researchers with significant contributions to the aerospace field. Prof. Meir Hanin of Blessed Memory was one of the founders of the Faculty of Aerospace Engineering in 1955.