Technion - Israel Institute of Technology > Archive > Technion signs an agreement with the University of Rochester in the U.S. 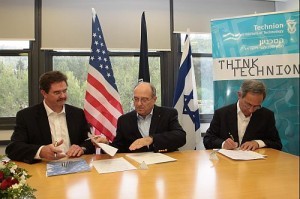 The Technion and the University of Rochester in New York State have signed an academic collaboration agreement with the aim of expanding existing ties between the two institutions. The collaboration between the institutions began more than twenty years ago, with the visit by Prof. Eby Friedman of the University of Rochester to the Technion, in the framework of the American Fulbright Program for lecturer and student exchange (www.fulbright.org.il).

Since then Prof. Friedman and his colleagues at the Technion, among who are Prof. Israel Sidon and Prof. Avinoam Kolodny, have worked to promote collaboration between the two institutions as well as organize several student exchanges using Fulbright Program alumni grants. Thanks to their initiative, and with the help of semi-conductor companies in Israel (among which are Intel, Marvell, Melanox, and Zoran), the Advanced Circuit Research Center was established in the Faculty of Electrical Engineering. The center is involved in developing the field of electronic design of silicon chips. Recently Prof. Friedman initiated the upgrading and expansion of relations into additional areas, with funding by the Fresh family of Rochester. The Fresh family intends to make a long term donation in educational, research and economic development programs aimed at tightening community ties between Rochester and Israel. The agreement will increase the mobility of faculty members and students, and advance collaborations between the Technion and the University of Rochester in additional engineering fields such as electro-optics, nano-electronics, renewable energy, and biomedical engineering.

The president of the University of Rochester, Prof. Joel Seligman, said at the signing ceremony, “We are proud of our students and faculty members who come to the Technion and we are sure that now the pace will only increase.”

Technion President, Prof. Peretz Lavie, said that “with this signing we are taking the first step of a long journey of collaboration between our two institutions.”

Also present at the ceremony were the Dean of the Hajin School of Engineering and Applied Science, Prof. Robert Clark, Dean of the Faculty of Electrical Engineering at the Technion, Prof. Adam Schwartz, Vice President for Resource Development and External Relations at the Technion, Prof. Raphael Rom, Deputy Senior Vice President for International Academic Relations, Prof. Anat Rafaeli, Dr. Neal Sherman, Executive Director of the Fulbright United States-Israel Educational Foundation, and those who initiated the collaboration between the institutions – Prof. Eby Friedman and Prof. Avinoam Kolodny.

The Fulbright Foundation was the first inter-governmental program charged with promoting scientific relations between Israel and the U.S. Israel’s participation in this program is overseen by the United States-Israel Educational Foundation.

In 1956 the two governments signed an agreement to set up the Fulbright United States-Israel Educational Foundation Authority. The primary goal of the Fulbright Program is to strengthen the basis for peace by strengthening mutual understanding between the people of the United States and the peoples of partner countries around the world.

Since its establishment, the United States-Israel Educational Foundation has awarded approximately 1500 scholarships to Israelis studying in different frameworks in the U.S. and about 1150 scholarships to American lecturers and students who have come to Israel. The total dollar value of the scholarships awarded in 2011 comes to $1,350,000.

The Fulbright Program has made its mark on academic research in Israel as well as on other central fields in the country. Among the program’s most prominent alumni who are also Technion faculty members are: