Two years ago, the researchers discovered a new chemical bond, which may have completed the ‘puzzle’ in the basic chemical sciences; both discoveries open doors for the development of new catalysts with special features unknown to date. 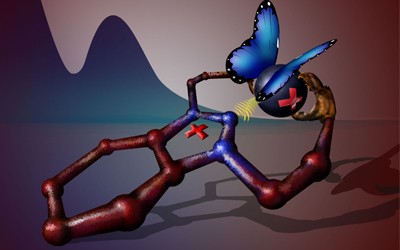 Researchers from the Schulich Faculty of Chemistry at the Technion discovered rare chemical materials that demonstrate an ability to bond a positively charged metal (+) to a positively charged non-metal (+); a discovery that has opened doors for the development of new catalysts with special features that had not been previously known.

“The field of catalysis is very broad,” explains Associate Professor Mark Gandelman from the Schulich Faculty of Chemistry at the Technion. “It affects our daily lives on many levels. Using catalytic processes we prepare innovative materials with unique properties; in fact, most of what serves us today results from catalysis, and is at the very heart of our quality of life in food, medicines, automotives, aircrafts and more. The global market for catalysis is estimated at $500 billion.”

Catalysis is based on the activity of a catalyst (a chemical substance that acts as a stimulant and opens up new ways for producing valuable materials that could not have been made without it). Many catalysts are made mainly from the core of metal and the organic material (ligand) surrounding it, which is what actually holds it together. The characteristics of metal (that is, the features of a catalyst) are affected by the organic matter that wraps it.

There is a chemical bond between the metal and organic material. This bond is very significant as it supplies the unique qualities of the metal. Professor Gandelman and researchers at his lab discovered two years ago a new type of bond between the metal and the organic material. This is an unprecedented bond between the ligand based on the positively charged nitrogen and metal. So far, similar bonds were based primarily on carbon, silicon, phosphorous, etc., so in fact, this discovery by Technion researchers completes the ‘missing piece of the puzzle.’ Technion researchers have now shown that substances called nitrenium (founded on positive nitrogen) can form a chemical bond with positively charged metal (+). It is well known that in nature, positively charged substances repel each other (such as in battery chargers). Chemically they also repel each other, but because chemical particles carry nuclei and electrons –they also attract each other.

“We have shown bonding between positively charged metal and positively charged non-metal (ligand),” explains Professor Gandelman. “These are very rare materials; they hold a basic scientific interest and great potential to serve as catalysts for important chemical reactions, such as turning simple inert hydrocarbons to valuable active materials in industry and daily life.”

As a result of this discovery, it may be possible in the future to improve or uncover novel chemical processes that will conserve energy and significantly reduce waste. “There is a high potential for green (sustainable) chemistry,” explains Professor Gandelman. “Chemical waste is a global problem.”